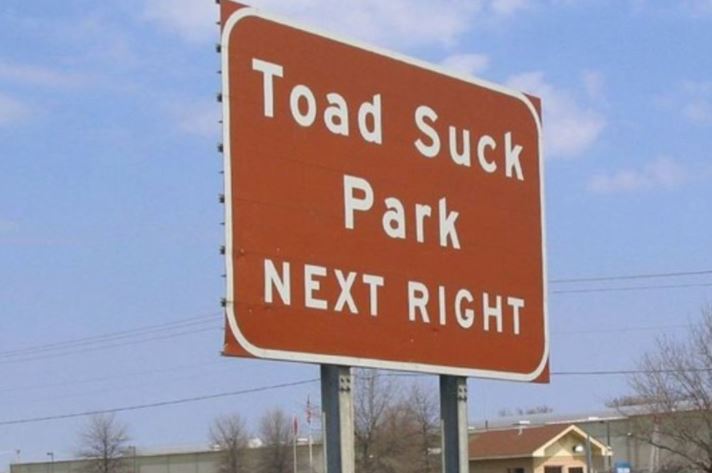 Funny and Unique Town Names in Arkansas to keep you laughing, and thinking

Study any map of the state, and all over Arkansas you’ll find  really unique, and funny names for the towns and cities, and they will bring a smile, a laugh, and maybe get your curiousity going.  There are many that are hard to forget, and more that will will  keep you laughing, or wondering “how did they end up with THAT name?”

Here is a favorites list of the funny and unique names in the state of Arkansas that I have compliled over the years,  along with some history about the name, the location, and  county.

Toad Suck Arkansas – every article written about funny town names of Arkansas has to include “Toad Suck” Arknsas. It is a small community in Perry county just across the bridge from Faulkner County and Conway Arkansas.    There is a beautiful park right on the Arkansas river outside of Conway named Toad Suck Park.  Local lore says that the name is disputed. Some say it comes from stories about rivermen that congregated at the local tavern where they would “suck on bottles ’til they swell up like toads”, while others believe it is a corruption of a French phrase meaning “a narrow river channel.” (?) Or maybe it is something else. Faulkner county has an annual Spring festival called “Toad Suck Daze” that takes place every year in Conway. It is a lot of fun for kids of all ages and has great rides, fun games, and yes-the  Toad Suck frog races.

Possum Grape Arkansas is a small community in Jackson County, Arkansas. The town was named in 1954 after residents were split on whether the name should be “Possum” or “Grape” They opted for both.

Evening Shade. Oddly there are two towns in Arkansas named Evening Shade. The one on the map and most well known is in Sharp County Arkansas.  The town was founded in 1817. Another lesser known Evening Shade is in   Hempstead County in southern Arkansas. The town of Evening Shade in Sharp County was the subject of a tv series  by the same name.It was a comedy series shown on CBS from 1990 to 1994, about a contemporary Arkansas town. The srries was produced by Arkansan Harry Thomason and his wife, Linda Bloodworth-Thomason and starred Burt Reynolds and Marilu Henner.

Bald Knob is in White County.  The unique  name comes from a huge rock outcropping that was nearly an acre in size. The town  was incorporated in 1881, after a railroad came through the area in 1872.

Monkey Run was a small community in Baxter County.  According to information in the Encyclopedia of Arkansas there were seven zinc mines operating in the area  in the early 1900’s . The name still appears on many maps.

Gassville, like MonkeyRun, also is a small community in Baxter County Arkansas, settled around  1840 . It was almost named Turkey Neck It has a very intersting history.  Read more here in the Encyclopedia of Arkansas.

Buffalo City,  is an unincorporated community in Baxter County, Arkansas, United States. The community is located at the end of Arkansas Highway 126. I love the name. There is not a lot of “official” information about this place but it can be found on online maps.

Yellville sounds like where I was when I didn’t keep my room clean when I  lived at home with my parents. The city of Yellville though, is  the county seat of Marion County in northern Arkansas.

Flippin Arkansas in Marion County, in N Central Arkansas is widely  known as the home of  internationally recognized Ranger Boats, bass boat manufacturer. It’s a flippin awesome place to visit since it is near both Bull Shoals Lake, and  world famous White River, a top destination for trout fishing.

Stringtown, which was also known as Pyatt and Clear Creek, is a small community located in Marion County .  Learn more here at the Encyclopedia of Arkansas

Des Arc, in Prairie County in SE Arkansas was a very early arkansas settlement that has a lot of history connected to the Louisiana Purchase. The name comes from French and the “Bayou des Arc” two miles north of city Learn more here

Lepanto Arkansas in Poinsett County was incorporated in 1909.  The name of the town is reportedly derived from a Greek city of the same name. Lepanto has several notable residents, namely Medal of Honor recipient James R Hendrix (1925–2002) Medal of Honor Recipient Battle of the Bulge 1944. as well as basketball greats Marcus and Malik Monk.  Lepanto was also the subject and setting of a book by Arkansas author John Grisham, “A Painted House.”

Fifty Six is in Stone County Arkansas. When founding the community in 1918, locals had submitted the name “Newcomb” for the community, but their request was denied, and the federal government internally named the community for its school district number, 56.

Goobertown is an unincorporated community in Craighead County, Arkansas. Goobertown is located along U.S. Route 49, about 10 miles NE  of Jonesboro.

Hasty Arkansas is a small town in beautiful Newton County, Arkansas. It is located on Arkansas Highway 123, about 8 miles east of Jasper Arkansas.

Nogo Arkansas certainly has an unusual name. It is located NE of Russellville in northern Pope county. So far, no luck finding out where the name originated. That was defintely a “NO GO.”

is an unincorporated community in Johnson County, Arkansas along highway 215. Check out the Oark General Store and cafe. It is a very popular destination for  all kinds of explorers from motorcyclists to Jeep and offroad enthusiasts. Stop by and try a burger at the Oark Cafe on your trip through!

Mena Arkansas  was founded in the late nineteenth century as a railroad town in western Arkansas along the route  of the Kansas City Southern railroad route from Kansas City, Missouri, to Port Arthur, Texas.

Nimrod is a small community located near the Fourche La Fave River in western Perry County. There seems to be some disagreeemnt on how the unique town name came about with some sources saying it was a biblical name and others think that it was named after a town in Tennessee that some early settlers traveled from.

Smackover Arkansas is a town in Union County Arkansas. It’s claim to fame is oil.  On July 1, 1922, a wildcat well 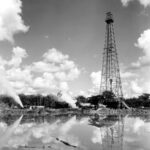 owned by Sidney Ulmstead, reached a depth of 2,066 feet. Abruptly, a rumble came from deep beneath the earth’s surface. The crew stepped away, listening. Suddenly, a thick black column of oil burst forth and spurted high above the earth.   It was at the time the largest oil discovery in the nation. Smackover’s nearly severnty -square-mile oil field,  led the nation’s oil output in 1925, with production reaching seventy million barrels.* Information from Encyclopedia of Arkansas

Snowball is a small unincorporated community in Searcy County, west of the county seat, Marshall.   Jimmy Driftwood, who won a Grammy Award for his song “The Battle of New Orleans,” served as school superintendent, teacher, and coach at Snowball in the 1950s. A post office was there until 1966.  As far as the name, like other Arkansas places, it is believed that there was a mistake made on the paperowork for incorporating the town, or the post office. Some sources say the town was supposed to be named Snow Hall.  Here is a story about the town in AY magazine’s online edition

Umpire Arkansas is a small community in Southwest Arkansas in Howard County.  Brief research has indicated there was an Umpire school district including a high school that consolidated in to Cossatot school district. The very unique way this town got it’s name is  featured in the LA Times article here

Weiner is a  town in Poinsett County incorporated in 1907. It is  recognized principally for its rice farming, duck hunting, and the very unusual name. What a unique name! Any “Weiners” in your stte?

Gurdon Arkansas in Clark County in Southern Arkansas is unique not only becuase of the name, but also because of the story about the mysterious “Gurdon Light” that floats above the railroad tracks there. The light has been reported since the 1930s. Many theories and stories try to explain the light, including one which connects a  murder in 1931 of William McClain, a railroad worker. The Gurdon light  legend drew national attention when the NBC show Unsolved Mysteries featured the story in December 1994.  Learn more about the Gurdon Light at the Encyclopedia of Arkansas entry   Another unique part of the history of Gurdon Arkansas is that it is the home of the oldest fraternal trade association in the US, the Hoo-Hoo fraternity  founded in 1892. The official name is the Concatenated Order of Hoo-Hoo. You can learn more about this unusual association here on their website

There are  other articles about the subject of funny  and interesting names in Arkansas, published online on personal blogs like mine, as well as online magazine sites. Here is one artile I found intersting  in particular, a   by Charles Hillinger of the Los Angeles Times Newspaper,  published October 13 1985  about town names in Arkansas like this one.  Another great resource for more information about all of these unique  places, and their history is available at the online  Encyclopedia of Arkansas.. It is a great resouce about the history of Arkansas.

What’s your favorite unique or funny town name in Arkansas? Contact me here to add yours to our list!
Thanks for checking out my personal blog.  Here is a brieft story for your about our wonderful  dog, Ranger.   Would you like to meet our sweet cat,  and our ferret?
If you have any interest in domain names you can check out the unique domain names I have for sale here

No comments to show.